However, Volley library currently still uses Apache‘s library such as 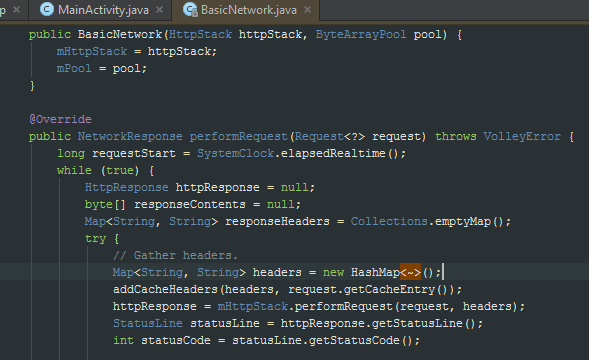 Perhaps my English is not so clear, however, hope that you understand my question.

Any explanation will be appreciated.

From @random’s comments, I created a new API23 project using Google’s official Volley library (I mean by git clone https://android.googlesource.com/platform/frameworks/volley as Google suggested here), instead of using compile 'com.mcxiaoke.volley:library:1.0.17' in build.gradle file. Yes, got errors with lack of Apache library when building project. Must add useLibrary 'org.apache.http.legacy' into build.gradle file as documented.

I have just customized Google’s volley (as a module in my project) removing Apache library. Please go to my GitHub sample project for your reference. However, please note that it has not been fully tested for all cases, and I have tested only 02 simple cases: GET and POST requests with my web service that is ASP.NET Web API.

It seems there has been quite a mess with the Volley library in Android M. A bug has already been filed for it and acknowledged by google.

You should star and track it for any further updates

Regarding your first question, you don’t get an error for missing apache files because the library that you’re using is still compiled using API 22

Apache HTTP Client Removal
This preview removes support for the Apache HTTP client. If your app is using this client and targets Android 2.3 (API level 9) or higher, use the HttpURLConnection class instead. This API is more efficient because it reduces network use through transparent compression and response caching, and minimizes power consumption. To continue using the Apache HTTP APIs, you must first declare the following compile-time dependency in your build.gradle file:

Android is moving away from OpenSSL to the BoringSSL library. If you’re using the Android NDK in your app, don’t link against cryptographic libraries that are not a part of the NDK API, such as libcrypto.so and libssl.so. These libraries are not public APIs, and may change or break without notice across releases and devices. In addition, you may expose yourself to security vulnerabilities. Instead, modify your native code to call the Java cryptography APIs via JNI or to statically link against a cryptography library of your choice.

Add this to the de dependencies of your app, and then works correctly:

It’s one huge hysteria about Apache’s HTTP client. You can continue using it in any project you want without any consequences. Why waste time porting code to other libraries? I described the best way to continue using Apache’s libraries here: https://stackoverflow.com/a/37623038/1727132 (spoiler: don’t use legacy version!)

Appache Http is removed from android API level 23 if you still using the Apache Http client you can include android { useLibrary 'org.apache.http.legacy'} in your project - module build.gradle