I have switched my app to target API 27 and now it can’t be granted WRITE_EXTERNAL_STORAGE permission — grantResult is always -1.

My app needs this permission since it doesn’t use apps private external storage space (which doesn’t require WRITE_EXTERNAL_STORAGE starting from API 19).

I know that in API 26 there have been behavior changes for permissions. However this doesn’t explain my problem.

(both permissions are declared via <uses-permission in manifest). 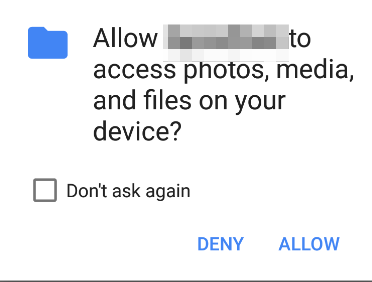 Shouldn’t the result be 0 for both since I have requested and, presumably, granted both?

I have tried to request WRITE_EXTERNAL_STORAGE alone, but in this case the dialog doesn’t appear at all.

One more detail: I have just checked the merged manifest in build/intermediates/manifests/full/debug and noticed that WRITE_EXTERNAL_STORAGE permission has attribute android:maxSdkVersion="18" (there is no such attribute in my manifest). This could be happening because my app has minApiVersion=21, but I’m not sure.

Somewhere along the line, you are picking up that android:maxSdkVersion="18" attribute. My guess is that it is coming from a library. Check the “Merged Manifest” tab in Android Studio, when you are editing your own manifest. It will have details of what is contributing the various elements and attributes.

android:maxSdkVersion has the effect of removing your <uses-permission> element on higher Android SDK versions, at least in terms of how runtime permissions work.