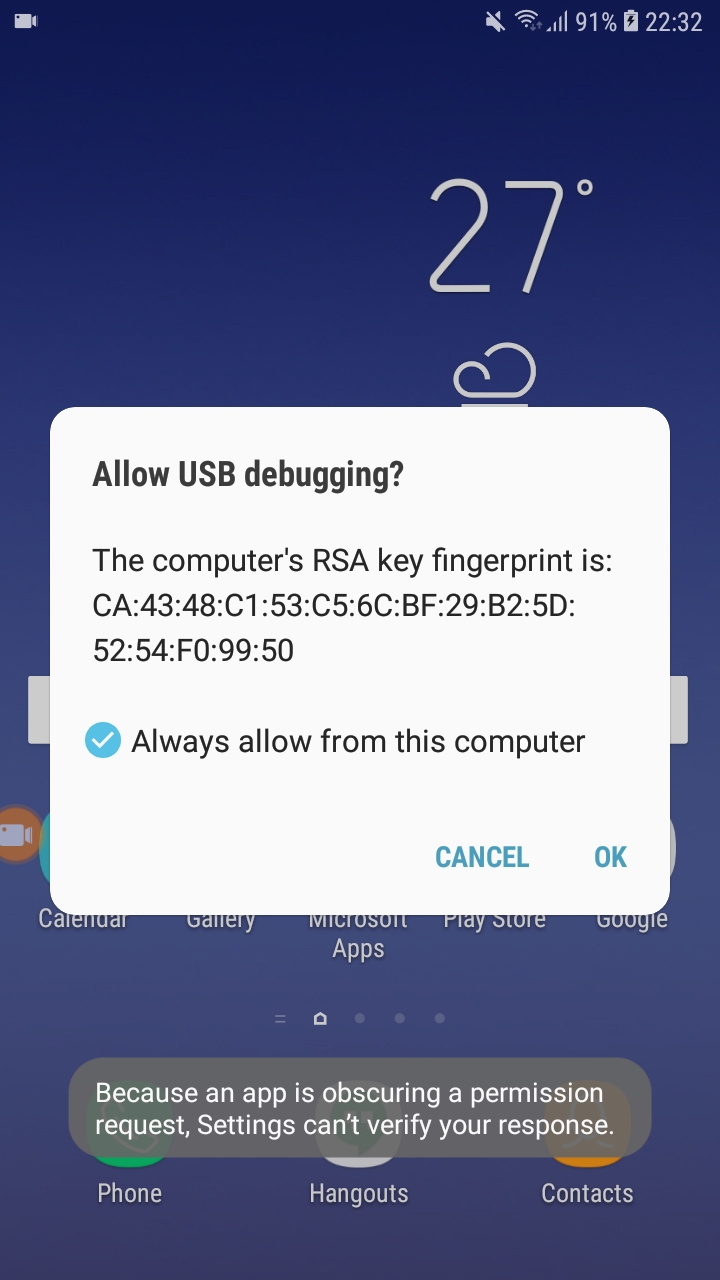 While I allow USB debugging, tap on OK button, Messaging has comes

because an app is obscuring a permissions request, Settings can’t
verify your response

The error is coming in allowing USB debugging.

Go to Settings -> Apps -> Special Access -> Draw Over Other Apps

See which apps have permission to draw over other apps, and turn them off one by one until the problem goes away.

I had the same with my tablet. I restarted tablet and it worked.

I found a post on XDA Forum that solved that problem. Here it is:

I solved this as follows:
– Go to Settings > Apps > Settings icon (at the bottom).
– Then Advanced > Special access > Draw over the other apps.
– At the top right, in the scrolling menu, choose “Show system processes”.
– Select “Floating dock” and disable “Permit drawing over other apps”.

May be DevMike trick is working but I solved this by uncheck the option of verify apps over USB.

This setting specifies whether your device should allow Google to inspect apps installed over USB for possible harmful behavior.

In order to install apps over USB you must also have USB debugging enabled and compatible software (such as the ADB tool supplied by Google to developers, though other software can also take advantage of this ability) on the connected computer.

App developers may want to have this service disabled in order to speed up the process of loading their app onto their device for testing. If you are installing apps that you did not develop yourself over USB, it is recommended that you enable this.

This setting has no effect on apps that are installed on the device itself, either from the Play store or from other sources.

Another cause is the Smart Pixels battery saving feature that is present on some custom Android ROMs; ie Resurrection Remix. Disabling Smart Pixels will solve the problem.

Enter into the safe mode and try connecting it. It works!

How to enter safe mode?

P.S: entering into safe mode might be different for some devices. Try Googling for your device model, if it doesn’t work!

The best way is to put Android OS in Safe-mode.

I had to turn off navigation gestures under the action and gestures settings.

Ok, disable Smart Pixels in Resurrection Remix ROM settings. This answer is ONLY for those running R.R. with Smart Pixels enabled. This setting is not an app, so it doesn’t show up under the “Display Over Other Apps” listing in settings. Credit to Jebtrix

I fixed the issue by uninstalling an App named “Mobile Go”

it was having permission of running on top of screen, i think it’s related to capture screen.

for me I had to turn off Edge Gestures on the Accessibility Services!

The problem is that you have the DU Recorder app running. You can see the orange camera icon in the left side of picture you attached. What you need to do is to close the app. You can do it by dragging the camera icon to the X.

It’s obvious that the problem is due to some running app is preventing you from getting permission.

Combinating the answers above from Terry Carmen and Andrew,

JUST TURN OFF ALL APPS AND TRY AGAIN

and it will work.

Opting for onscreen buttons instead of navigational gestures worked for me.

Be aware that Google is telling that not all cables are able to use MTP transfer.

If you are displayed wrong icons at the beginning it might be that the USB cable needs to be different and most likely unique to the device or at least have transfer capability.

Be aware if MTP does not work, your cable might be wrong.

@Terry Carmen’s answer is acceptable for me, the problem is occuring with Mobile Go app, revoking the access permission to Draw over the apps solved!

Turning off Assistive/Quick/Shortcut ball did the trick for me.
Also, try revoking the Debugging Permissions from Developer Options under USB debugging, and setting connection mode to Media Transfer.