Does anyone know if it is possible to disable the DDMS in Eclipse? By that I mean DDMS should not being start when Eclipse is launched.

I’d like to use only the DDMS from the terminal, but when I start it it keeps saying:

Could not open Selected VM debug port
(8700). Make sure you do not have
another instance
of DDMS or of the eclipse plugin running. If it’s being used by
something else, choose a
new port number in the preferences.

I like the standalone DDMS better than the one that is built in to Eclipse, mostly because it is far easier to switch between DDMS and the source code that way. And, I feel it’s being put too much into the same program when DDMS is run as a plugin to Eclipse. Also, as DDMS is quite unstable and crashes a lot, its easier to restart only DDMS and not having to restart the “not-so-fast” Eclipse.

The ADT plugin depends on the DDMS plugin.
Even if you (Help > About Eclipse SDK > Installation Details) uninstall the DDMS plugin it will still try to connect to the device.So, You can remove both or none of them.

First In First Served. The first DDMS instance will get the connection and the other will still continue complaining.

Try these settings in your Eclipse->Window->Preferences->Android->DDMS section: 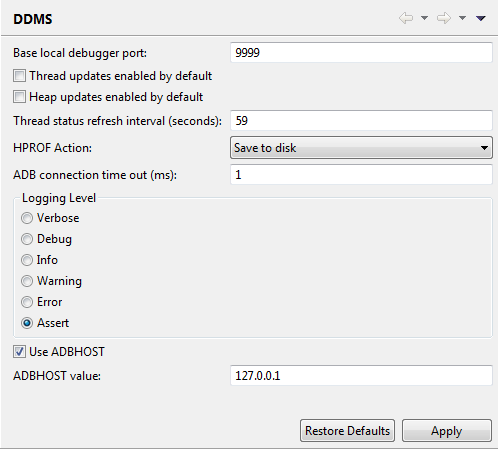 For me was the problem that I need to have the ddms running in a IDE instance that is started from the first eclipse IDE. But as ddms is already started be the 1. ide, I got the same port problem. I found that you must rename the ddms.bat file in your Android SDK installation in the folder “tools” (e.g. C:\Users\User\AppData\Local\Android\sdk\tools) so Eclipse IDE cannot start ddms. Before you start a second instance of eclipse, you rename it back.