I can’t find the option to set the NDK path on Eclipse Juno with the ADT plugin. (I downloaded yesterday the ADT Bundle from the Android site).

Everyone says I should find it under Windows -> Preferences -> Android -> NDK but the option NDK under Android simply does not exists. Maybe they changed it’s location in the recent version? Anyway I can’t seem to find a way to change the NDK path in my Eclipse. 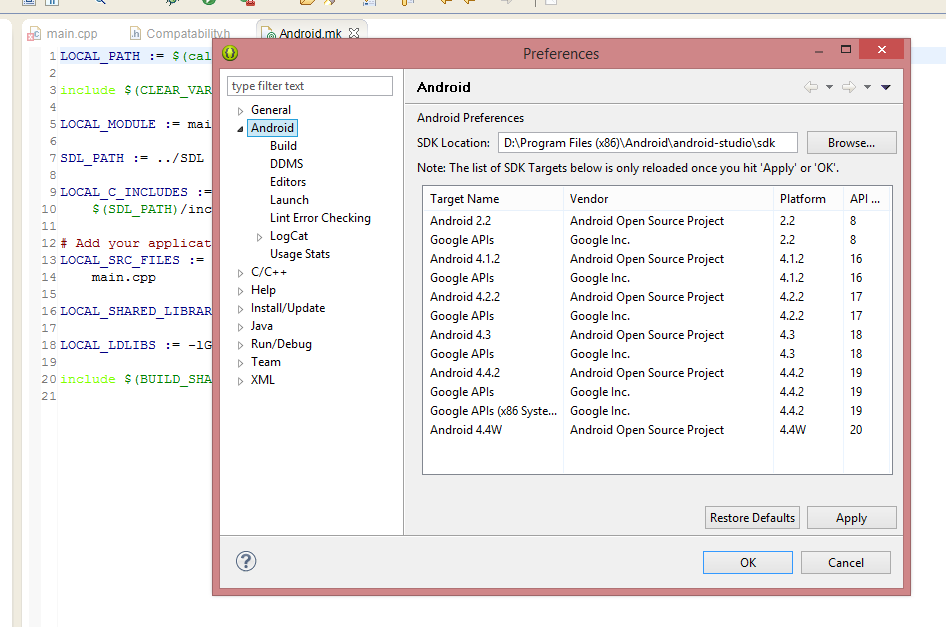 you need re-install the ADT-23.0.4.zip (Don’t forget select the Android Native Development Tools);
Please have a look at this Android SDK page.

I faced the same problem. It was annoying to waste those few hours, but I guess I figured it out.
What I did was,

I hope this won’t cause any problems in the future!

The Preferences->Android->NDK setting appeared and I was able to set the NDK path.

I had the same issue, i dont know why, but the problems is with the Eclipse/Juno version, so i download in the eclipse page the Kepler versión and install the pluggin of adt, And all works just fine.

I had this issue with the latest Eclipse Luna and the ADT plugin – it turned out despite both the CDT and Android Native Developer Tools plugins being installed in Eclipse Luna they were not working.

The cause was that I was using the Apple Java 1.6 (which is Java 6), and Luna “requires” a Java 7 VM. No warnings were provided though! To solve it I installed the latest JDK from Oracle, and then updated the Eclipse.ini file inside the Eclipse.app bundle, adding the 2 lines:

just before the line that is -vmargs.

Then when I restarted Eclipse, the CDT was correctly being used Eclipse -> Preferences... listed some C++ settings that were not previously there, and the Android section had an NDK entry the allowed to specify the path.