I created a target with SD Card 512MB, Device RAM size 512, snapshot enabled. I waited for 30 minutes but the emulator doesn’t ends up loading. It keeps showing a flash word “Android” on the black screen.

Before running the emulator, I closed most other programs.

What’s wrong with it? This is very frustrating. 🙁

It shouldn’t take more than 5-10min at most to build the emulator on initial startup. The SD card size has no effect on memory usage, it’s not loaded into memory, it just creates a larger image file for the sdcard. Setting the emulator to have 256mb of ram will help, but in general when I have the same problem I just close down the emulator window and re-start it. Sometimes it just gets hung-up on creation and isn’t a memory issue (I have 16gb of ram and still have the problem from time to time)

What is your CPU and RAM usage during startup? Do you have a lot of IO swapping occurring? Considering that Windows needs at least 512 to run right half of the time and Eclipse is a memory hog you probably just need more RAM.

You’re assigning the emulated Android instance half of the physical memory on your machine. Get more memory.

Emulator is in general very slow, and the higher the OS version on the emulator, the slower it gets. I’m a game developer, and with my AMD Athlon X3 2.90 GHz with 4GB RAM it gives me 5-6 fps. I tried to open one of my apps on Honeycomb emulator, and it was really terrible. It opened, but I couldn’t do anything with it. So the best answer is purchasing a real device.

I’ve experienced the same thing and in my case I had to set “Min SDK Version” when creating the project in Eclipse. Without this setting the emulator didn’t start.

Android Development Tools (ADT) 9.0.0 (or later) has a feature that allows you to save state of the AVD (emulator), and you can start your emulator instantly. You have to enable this feature while creating a new AVD or you can just create it later by editing the AVD.

Also I have increased the Device RAM Size to 1024 which results in a very fast emulator.

Refer the given below screenshots for more information. 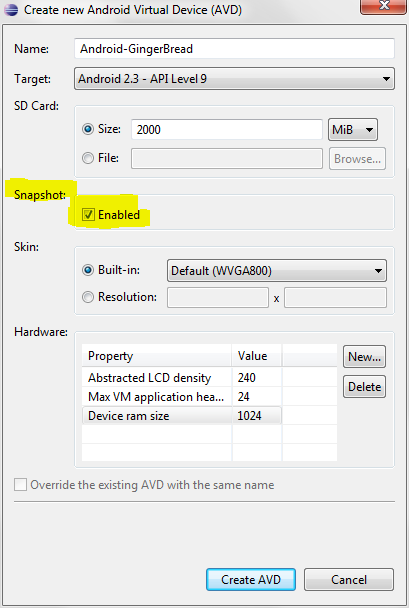 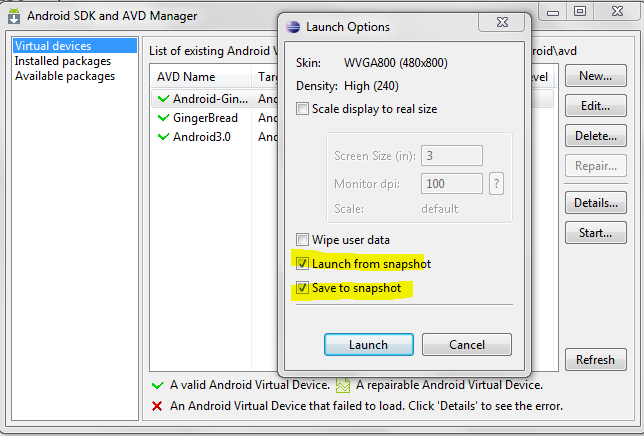 And for speeding up your emulator you can refer to
Speed up your Android Emulator!:

The native Android emulator is really slow. It’s much faster if you use Android on a virtual machine. You can follow my detailed guide on setting it up. http://www.bobbychanblog.com/2011/07/faster-android-emulator-alternative-using-virtualbox/