Today the Google Drive app asked if I wanted to install the new apps Sheets & Docs.

I’ve accepted, expecting it to open Google Play Store so I could press install.

It didn’t. It just showed me the popup with the permissions of each of the apps to confirm the installation, the same that appears when you press “Install” on any app on the Play Store.

I was not aware this could be done.

How can we reproduce this behavior in an app: have a button “Install App XPTO” which doesn’t need to open Google Play Store? Just shows the permissions dialog and proceeds to install it via Play Store?

For those downvoting because they think this is the same as other questions… It’s not!

In this case, the APK is not downloaded by Google Drive app and then installed. Google Drive “tells” Play Store to download & install.

To support my case: after pressing INSIDE Google Drive to install the apps without opening Play Store, the download starts. During the download I’ve opened the Play Store to check and: 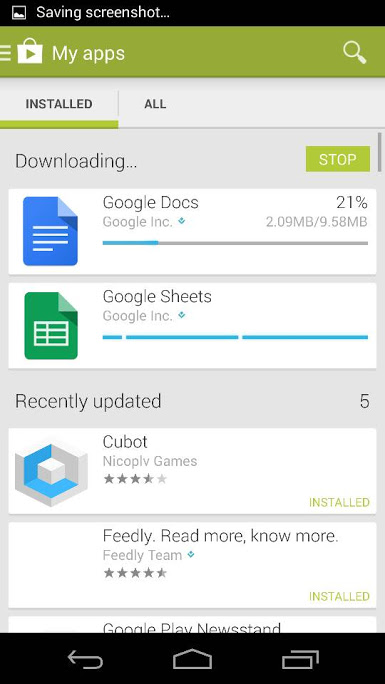 The screenshot proves that it isn’t Google Drive downloading the APK and the installing it. It’s the Play Store.

So, theoretically, one could create an intent

with correct extra values and voilà!

However, calling LightPurchaseFlowActivity from non-Google signed app is failing, because they are, again apparently (according to the logs), checking the calling package’s signature:

So, there, this can not be achieved at this moment.

Google+ now implements buttons where you can directly download an app (see this link) without clicking the button on the play store site.

If you add the rdid, rdot and feature parameter it works on my phone (if I type it in the browser, not tested with an intent and not tested to update an app, only installing it).

I found out that you only need to add the rdid-parameter to the url. Source: http://www.androidb.com/2014/04/increase-app-installs-with-a-single-trick/

Does not work with an intent. 🙁

I’d say that the Google Drive has system permissions, just like the Play Store. Probably because it is signed with Google’s signature.

If you manage to have the “android.permission.INSTALL_PACKAGES” permission you can call the API (which is not included in the android.jar deployed by SDK Manager, you have to get the hidden APIs from the android.jar in the emulator for instance) to install the applications.

So, basically, unless you have system permissions (by putting your APK into /system/app, signed with OEM certificate or with root) you won’t be able to do it.

If you know where you have the apk file, you can easily.