So I want to have a keyboard in my app that has emoji just like Whatsapp or Hangouts. How can I do that? I want to leave my key keyboard as it is I just want to add tabs to put emojis. I would think it would be easily supported by the soft keyboard but I can find nothing so far. Anyone could tell how to do it?

UPDATE:
The keyboard with emoji is included in Android KitKat and can be accessed by long pressing the new line button in the keyboard. The Hangouts keyboard however has the emoji icon visible instead of the “new line” key. If someone knows how to make this the default (either in layout or programmatically) I will take that as the correct answer.

As @dbar pointed out, the answer is:

But in my case, I was already using textMultiLine, so I had to use the both of them together: 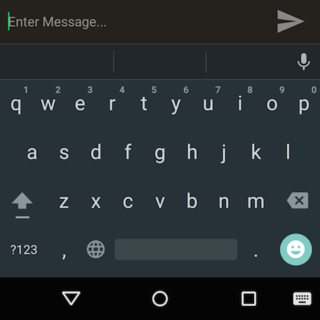 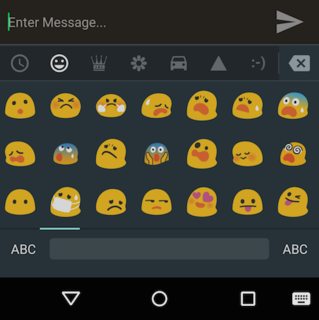 I’m not sure about the Exact android version, but this should work only on Android 4.1 and above

Finally the answer was:

The new line key becomes a key to take out the emoji keyboard. The only quibble is the ‘new line’ key from the keyboard disappears with this configuration (before you could long press to choose between emoji/new line but now it’s only emoji).

In Google Hangout, the emoji button is not on the keyboard (at least on my phone which is already using a third party keyboard), it’s inside of the TextEdit box, and so it’s part of the application itself (Gabe, I’m talking about the latest Google Hangout on top of KitKat with emoji support, all the current screenshots I found of Google Hangout do not show what I’m seeing on my phone, so this must be a very recent feature).

Then, it’s just a matter of hiding the keyboard when clicking on that ImageButton and replacing it with a panel full of emojis when that happens (like in this open source emoji android keyboard, which is under a creative commons non-commercial license).

There is no functionality to add tabs to any generic keyboard. Certain keyboards may support it, but it isn’t a common feature. You could write your own fully custom keyboard, but that’s a lot of work and will piss off many users.

Also, I’m not sure what you mean about by like in hangouts. I use hangouts- it doesn’t do anything odd with my keyboard. It stays as Swype, there’s no special emoji tab. It may be a feature of your favorite keyboard based on the input type (I assume both use input type textShortMessage). But it isn’t a generic feature.