I’ve already read all the related questions before posting this one.

I’ve developed a game with Unity3D and uploaded to Google Play. Yesterday it was available for all devices, there were reviews from other users. Today I’ve got couple reports about unavailability of the app on Google Play. It’s available on Web version of GP, but is incompatible for any device, and not available at all in mobile version on GP.
In developer console all the devices are compatible:

And on the web version they are not (All previous versions were deleted from devices): 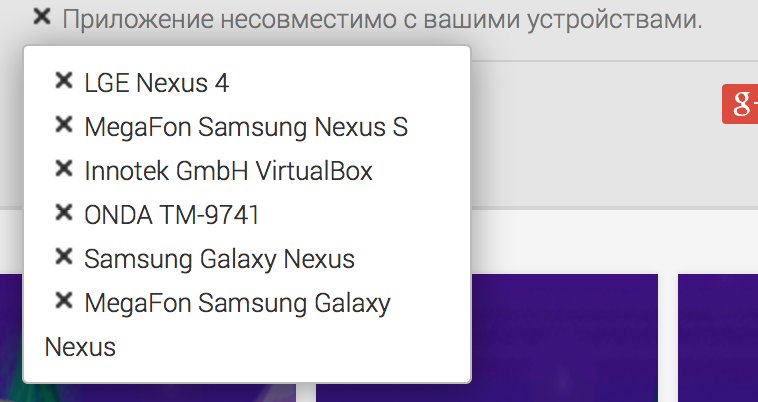 So, the question is why it was available yesterday and is not available today? I have not uploaded new version, didn’t change anything.
The app is completely free, its size is about 8.5 mb.

I recently encountered this issue. The edited output from my conversation with a Google Play Developer Chat rep:

Usually, the cause of the error you’re seeing is due to the fact that developers can’t purchase or download their own apps.
If you’d like see what your apps look like from the perspective of a Google Play user, I recommend logging into Google Play with an email address other than the primary email address for your Developer Console.
It’s very likely all the devices are supported, this is just a common message to see when you’re not allowed to download the app, in this case because it belongs to you.

While the above answer may not have been the case for the OP, for me, it was the answer. I tried with another Nexus with a different account than my own and it showed as compatible.

Also, another developer with the similar app contacted me with the same problem. GP support said him, that it was a bug on the GP side. His app is also available now.

A small percentage of my users were getting this error even though most users could install it on the same device, and I was banging my head against the wall to try to figure out why.

Turns out that this error sometimes means that the app isn’t available in the user’s country! Most of the time country incompatibility gives my users an error along the lines of “this app is not available in your country,” but apparently under some circumstances it just gives you a generic “devices incompatible” message. So if you can’t make it work with the above answers, find out the user’s country and add it to your distribution list.

Try a program called Racoon. Requires Java, but basically it is a simulator for your desktop which will allow you to download any app you want. Should work for paid apps as well. You then take the apk file and side-load it to your android device (manual install)

Another link I used for a different app was APK Downloader. This is especially good for those who have the problem ‘this app is not available in your country/region’. You are limited to free apps, but you can download and then side-load app.

Not sure why google is such an a** sometimes. But these two solutions makes the world more connected.