I’m using Android Studio, with multiple flavors using Gradle, each with a Debug and Release type, organized as described here, on the bottom half.When I try to start the debugger, I get this error:

I’m also unable to attach the debugger to my device once it’s running (it only displays the name of my phone, not the app).

All 3 flavors install on my phone just fine. I just can’t get it to let me debug them. I also tested attaching the debugger on a Nexus tablet, and I got the same result.

It’s not Gradle specifically as a whole because I can run other Gradle-based apps and attach the debugger just fine so I wonder if it’s something with how I’ve setup my Gradle project and settings.

I really have no idea what else to try. Android Studio is completely up-to-date. I’ve restarted Android Studio, my phone, and my computer.

Also, last week I was having this problem, but it was a specific socket that was blocked, from trying to run the emulator and my phone at the same time. I also noticed I had multiple Gradle processes running, because it wasn’t killing them on its own, which I often had to kill Android Studio to kill them. Once that was fixed, it was working off and on.

Let me know if you need any other info.

Edit I finally know why @hasanaydogar’s answer works and why it probably would have solved my problem if we had known it then. See my 2nd comment on it to know why, but in short, you have to select in that dropdown the name that matches your app’s root directory.

Just Click the button (left side the RUN button).

It will connect to your device. 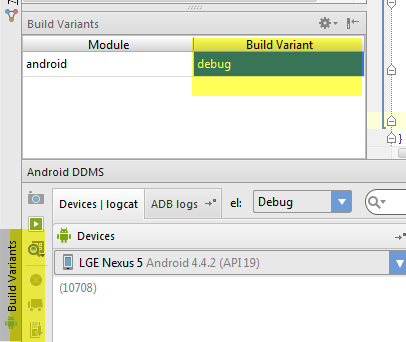 I finally understand why I was getting that error so I’m going to explain how I Debug now. Note that I use Gradle (build multiple apk’s using the same code), which might influence some how you use the third part of this answer.

For these to work, in the dropdown next to the debug (icon in #1) and run buttons in the top toolbar, you have to have the one selected with the following icon next to it because that’s the name of the root directory of your app where all your code lives:

My Release version is just there for when I’m ready to build an apk for release.

Doing things in this way has eliminated that error popping up anymore. I think the Release version is just not made for debugging, and I haven’t found an easy way to turn the debug flags on when in Release mode.

I managed to get this working by attaching the debugger after a build see Unable to open debugger port : java.net.SocketException "Socket closed"

I managed to get rid of this problem by killing & restart the adb process,hope this would help :]

Change the Debug type to Native