I’m running unit tests in Android Studio. I have a Java class that loads a native library with the following code

How can I make it find the path of native .so libraries which is located at src/main/libs in order to unit test without errors?

Note: inside src/main/libs directory I have 3 more subdirectories: armeabi, mips and x86. Each one of those contains the proper .so file. I’m using the Non experimental version for building NDK libs.

I don’t wanna use other 3rd party testing libraries as all my other “pure” java classes can be unit tested fine. But if that’s not possible then I’m open to alternatives.

Here is my test code which throws the error

The only solution I found that works without hacks is to use JUnit through instrumentation testing (androidTest directory).
My class can now be tested fine but with help of the android device or emulator.

I am not sure whether this solves your problem or not but so far nobody has mentioned about strategy pattern for dealing with classes preloading library during their creation.

We want to implement Fibonacci solver class. Assuming that we provided implementation in the native code and managed to generate the native library, we can implement the following:

Firstly, we provide our native implementation:

Thirdly, we wrap the solvers with parental class choosing its own implementation during its instantiation:

Basically, this gets around the native library load problem by mocking out the native code for java code.

There is a way to configure library path of Gradle-run VM for local unit tests, and I’m going to describe it below, but spoiler: in my expericence, @ThanosFisherman is right: local unit tests for stuff that uses the Android NDK seem to be a fools errand right now.

So, for anyone else looking for a way to load shared (i.e. .so) libraries into unit tests with gradle, here’s the somewhat lengthy abstract:

The goal is to set the shared library lookup path for the JVM running the unit tests.

Althoug many people suggest putting the lib path into java.library.path, I found that it doesn’t work, at least not on my linux machine. (also, same results in this CodeRanch thread)

With that, you can run, e.g. ./gradlew :mymodule:testDebugUnitTest and the native libs will be looked for in the paths that you specified.

Using Android Studio JUnit plugin
For the Android Studio’s JUnit plugin, you can specify the VM options and the environment variables in the test configuration’s settings, so just run a JUnit test (right-clicking on a test method or whatever) and then edit the Run Configuration: 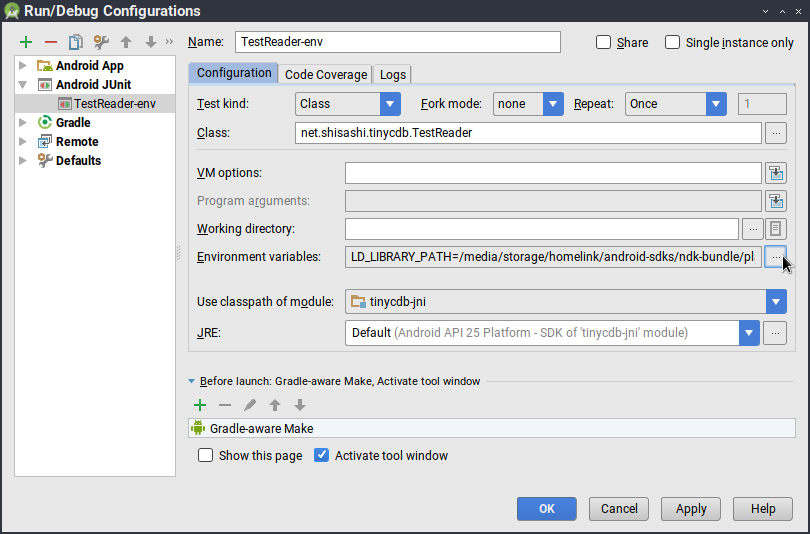 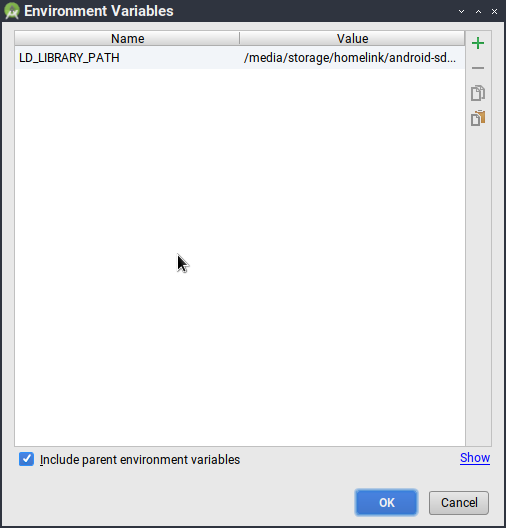 Although it sounds like “mission accomplished”, I found that when using libc.so, libm.so and others from my os /usr/lib gives me version errors (probably because my own library is compiled by cmake with the android ndk toolkit against it’s own platform libs). And using the platform libs from the ndk packages brought down the JVM wih a SIGSEGV error (due to incompatibility of the ndk platform libs with the host os environment)

Update As @AlexCohn incisively pointed out in the comments, one has to build against the host environment libs for this to work; even though your machine most likely is x86_64, the x86_64 binaries built against NDK environment will not do.

There may be something I overlooked, obviously, and I’ll appreciate any feedback, but for now I’m dropping the whole idea in favor of instrumented tests.

If the library is required for your test, use an AndroidTest (under src/androidTest/...) rather than a junit test. This will allow you to load and use the native library like you do elsewhere in your code.

If the library is not required for your test, simply wrap the system load in a try/catch. This will allow the JNI class to still work in junit tests (under src/test/...) and it is a safe workaround, given that it is unlikely to mask the error (something else will certainly fail, if the native lib is actually needed). From there, you can use something like mockito to stub out any method calls that still hit the JNI library.

For example in Kotlin:

Just make sure, the directory containing the library is contained in the java.library.path system property.

From the test you could set it before you load the library:

You can specify the path hard coded, but this will make the project less portable to other environments. So I suggest you build it up programmatically.

The .so files are to be placed under

For reference check the page – http://ph0b.com/android-studio-gradle-and-ndk-integration/, though some portions might be outdated.

Try running your test code with java -XshowSettings:properties option and make sure your destination path for system libraries and in the output of this command, library path values are the same