Is it a good choice to use Google Protocol Buffers in JavaScript or is it better to do it with JSON?

Also it’d be great if someone can give me a simple example about Protocol Buffers implementation in JavaScript. The documentation on the Google’s site is scarce.

The official protobuf project support only Java, C++, and Python. Not Javascript.

According to the Wiki of the project, there are three projects porting protocol buffers to Javascript.

Protobuf.js is up-to-date.
protobuf-js has not been updated for two years, so I would favor Protobuf.js.

The question still is “Why”?: protobuf may be a bit smaller, especially when a lot of numeric values are transferred, but JSON is simply the more common protocol in the JS space and probably better supported and easier to integrate into other tools.

Update (28/7/2016):
Release 3.0.0 was published – supporting Javascript and other languages as well – in addition to some other features.

Screenshots from the release documentation: 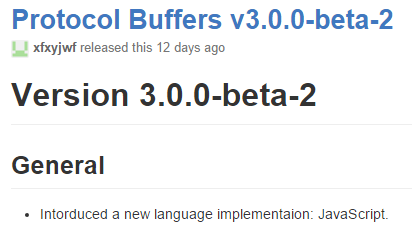 And it support JavaScript natively. The basic information is in the announcement.

We are going to look into it soon.

I had a bit of hard time configuring but I’m sure that was more of my issue. You can serialize/deserialize a protobuff/protostuff message to/from JSON. I’m at the early stages of using this but it looks promising so far.