Note that this question Is GUI for Android SDK manager gone? has been answered with a solution that was correct in the past, but no longer addresses the problem.

In the past, I have run IntelliJ Idea to develop Android projects, and the GUI SDK manager was available. Returning to Android development I now find https://developer.android.com/studio/index.html only offers a command-line stand-alone SDK manager.

How can I install the GUI SDK manager? I am considering installing Android Studio just to get it and then maybe uninstall Android Studio and retain the SDK manager. I suspect I might have the same problems with AVDs.

I am glad to inform the community that there is still a fully functional workaround to use the Android SDK whilst utilising the traditional GUI that most users are accustomed to. I am pleased to say that the GUI is here to stay (despite having been officially cut off sometime in SDK 26)

If you are starting from scratch I suggest you go through this post first: How do I download the Android SDK without downloading Android Studio?

Here the most important thing is that you must first install the base packages (i.e sdk tools, platform-tools, GUI sdk and AVD manager etc) found in the last installer version of SDK if you are starting form scratch, otherwise you can skip this step if you already a working sdk installation.

I discovered that even if you update the “SDK tools”, the latest version that you can get is always 25.x.x which has problem on its own as it doesn’t allow you to run API levels 26, 27 or 28, as I pointed out in my post on another site: Can’t start Android 8.0 Oreo on emulator: “Decryption unsuccessful”

After some weeks of investigation I figured out, this was something to do the outdated emulator which is no longer provided unless you running Android Studio (which is contrary to what we want to achieve)

From the looks of things it seems the emulator (originally distributed
as part of the Android SDK Tools) is no longer updated since version
25.2.3

Thus the workaround involves a “manual/forced upgrade” of emulator tools. Currently I successfully upgraded to version 27.3.8 (and running Android 9 smoothly).

To shorten the story, firstly make sure the base packages are still intact, and upgrade the emulator as follows: 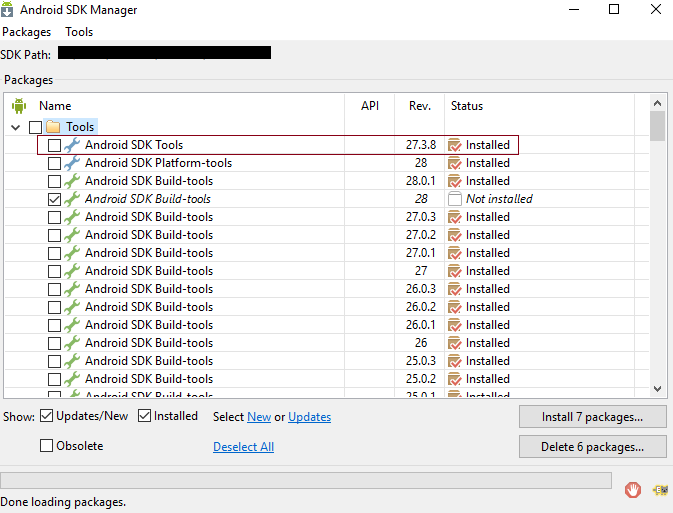 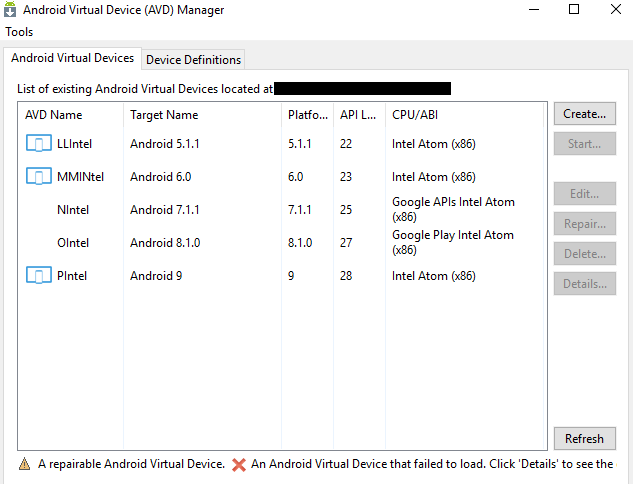 Run the newly created virtual devices and you should be good to go: 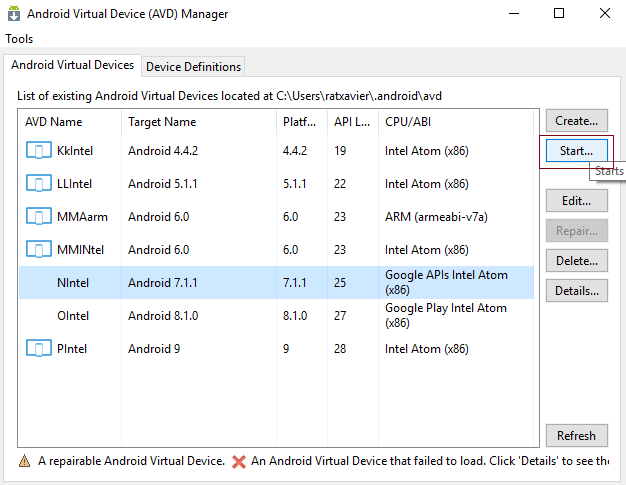 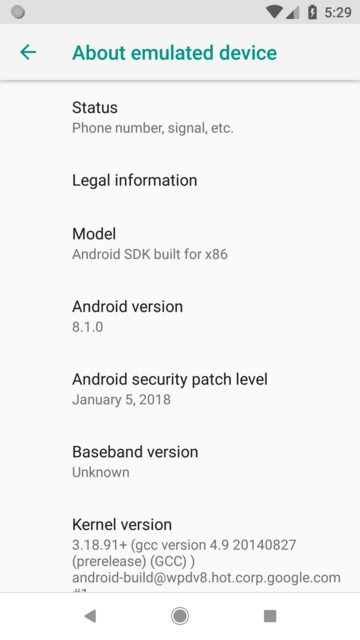 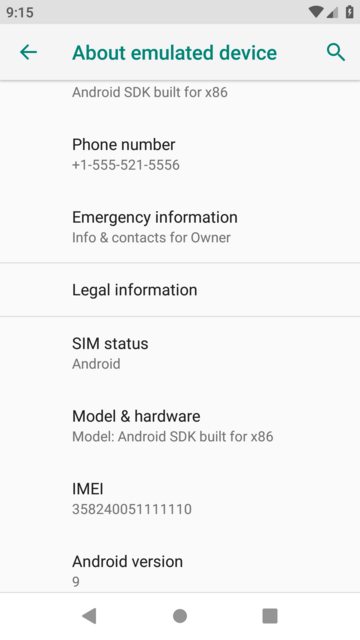 Be sure to update the relevant tools, images etc to get the best experience

Special thanks to androiddev for providing links for linux, eaglemt and Vladyslav Panchenko for providing the links to repos and mostly important for mac os links.

It seems Google intentionally decide to pull the plug on GUI for standalone Android SDK in favour of Android studio perhaps because of potential security bugs, but whatever the reason,it may not sound convincing for someone just needing the standalone package…

It seems like the GUI is completely gone now. Atleast from SDK v26, the SDK Manager GUI is only accessible through Android Studio. The SDK Manager button on Visual Studio has become irresponsive. Now we’ll probably have to install Android Studio just to manage and update the SDKs and Emulators

Google’s another dreadful act for promoting its own IDE.

For VS2015 and older, we recommend downgrading SDK Tools to 25 and using the old Google Emulator manager GUI. SDK tools 25 can still be used alongside API 26, 27, and newer, and won’t impact development for new platforms. This will give you an interface for managing your Android SDK for older versions of VS.

We provide an open source GUI interface based on sdkmanager.bat: B4A Sdk Manager 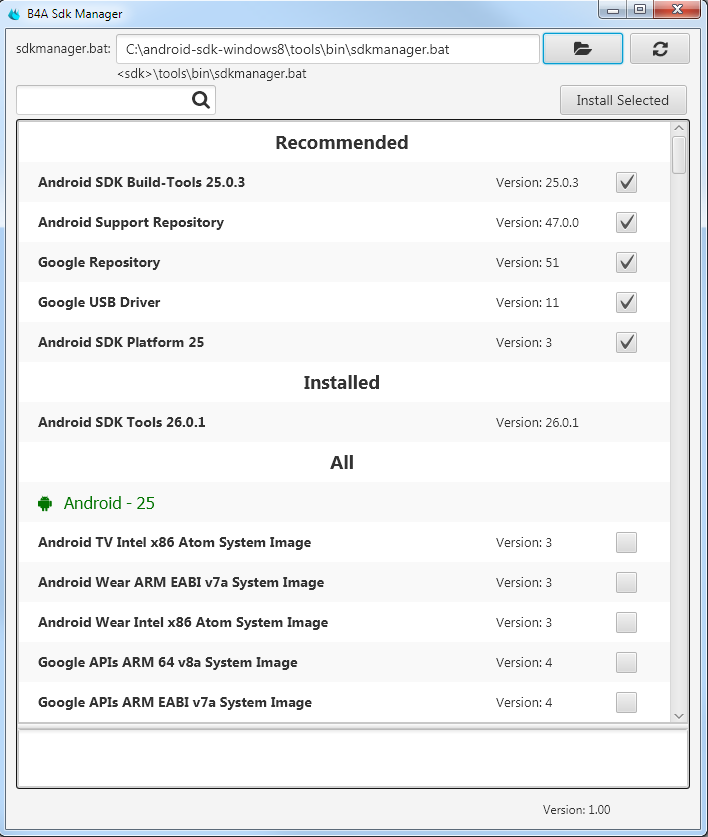 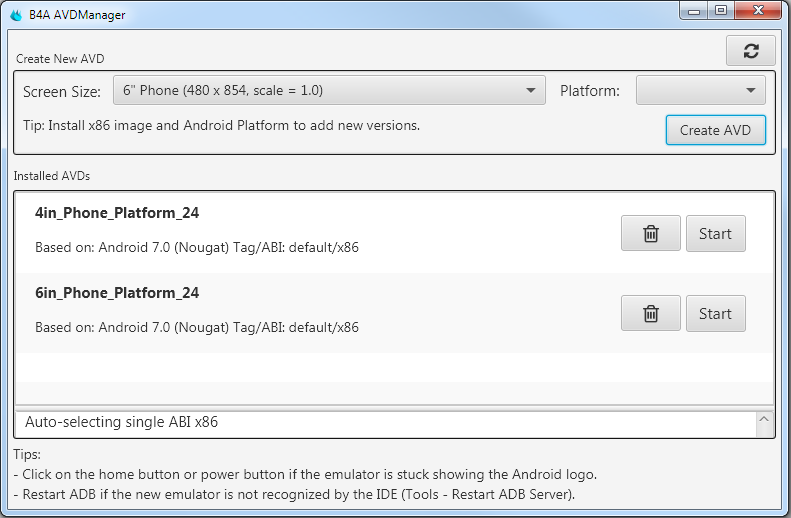 It was developed mainly for B4A developers, however it can be useful for any developer who doesn’t use Android Studio.

According for this announcement Google doesn’t intend to support ADT plugin for Eclipse since June 2015, and so as GUI for ADT at all. They explain the decision with an entire switching to Android Studio. There are no links on official Android sources where to download last GUI version, because they find it as having potential security bugs.

So you have chance to download the last saved version, till the link will not be changed. But I think it always could be possible to find by tag “installer_r24.4.1-windows.exe” in Google.

Thank to Losin’ Me for links:

I have just released a simple Android SDK GUI. Maybe this little weekend project could save some people from headache of using sdkmanager command line or downloading android-tools twice.

You could check my project at AndroidGUI.

Fork as you please or better yet send me PR. Any help would be very much appreciated.

PS: It would be very useful if somebody could point me to the latest sdklib-*.jar source code. So that I could interface with Android SDK directly.

Well because the standalone manager is outdated and in linux commands like “android sdk” and “android adv” stop working I learned to run devices from command line tools: