Is there a way to tell the Chrome debugger (or maybe Firebug?) to not break within certain files? To assume they’re not broken, essentially? This seems like something they might build in.

Update. In Chrome v.75 there is a separabe tab for blackboxing.

Above works in stable Chrome build as well now.

The latest version of Chrome has implemented a new blackbox feature that does exactly what you are looking for. Basically, when you set the blackbox option on a given file, it will prevent Chrome debugger from breaking into that file.

This feature is built-in and it can be set with the context menu of the file (right click). It will also work if Chrome debugger is set for stopping on all exceptions.

If the issue you’re having is that the Chrome debugger is stopping on all exceptions, even the ones inside of jQuery, then you may need to tell Chrome to only pause on uncaught exceptions, not all exceptions. When in the Script panel in the debugger, there is an icon in the lower left corner of the window that controls this.

In Chrome, open Developer Tools, then goto Settings, and you will see the Blackbox tab:

In FireFox it’s even easier, just click the Eye at the bottom of the file: 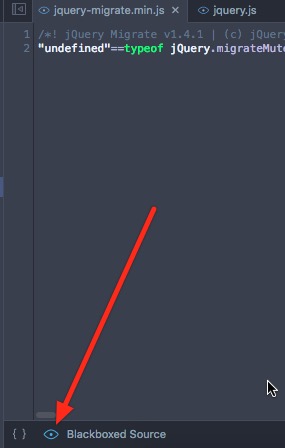 If the debugger is blowing up somewhere in the jQuery files, you could potentially wrap the suspect calls in a try/catch and then throw an error in your own catch. That way, you can isolate exactly where your’re going wrong.

I would be more inclined to do stack traces to see why my code is blowing up, e.g. invalid JSON, than to try gloss over it.