I have looked everywhere and I still have issue debugging TypeScript inside VS Code. I have read this thread but still I am not able to hit my breakpoints placed inside a TypeScript file, hitting the breakpoints in .js files all works fine.

So here is the simplest “hello world” project I have set up.

I have generated the js.map files by running the tsc --sourcemap app.ts command.

After all of those steps when I set a breakpoint on the console.log(message); row and launch the program (F5) from the “Debug” tab that breakpoint is grayed out saying “Breakpoint ignored because generated code not found (source map problem?).” I attached a screenshot of what I am observing: 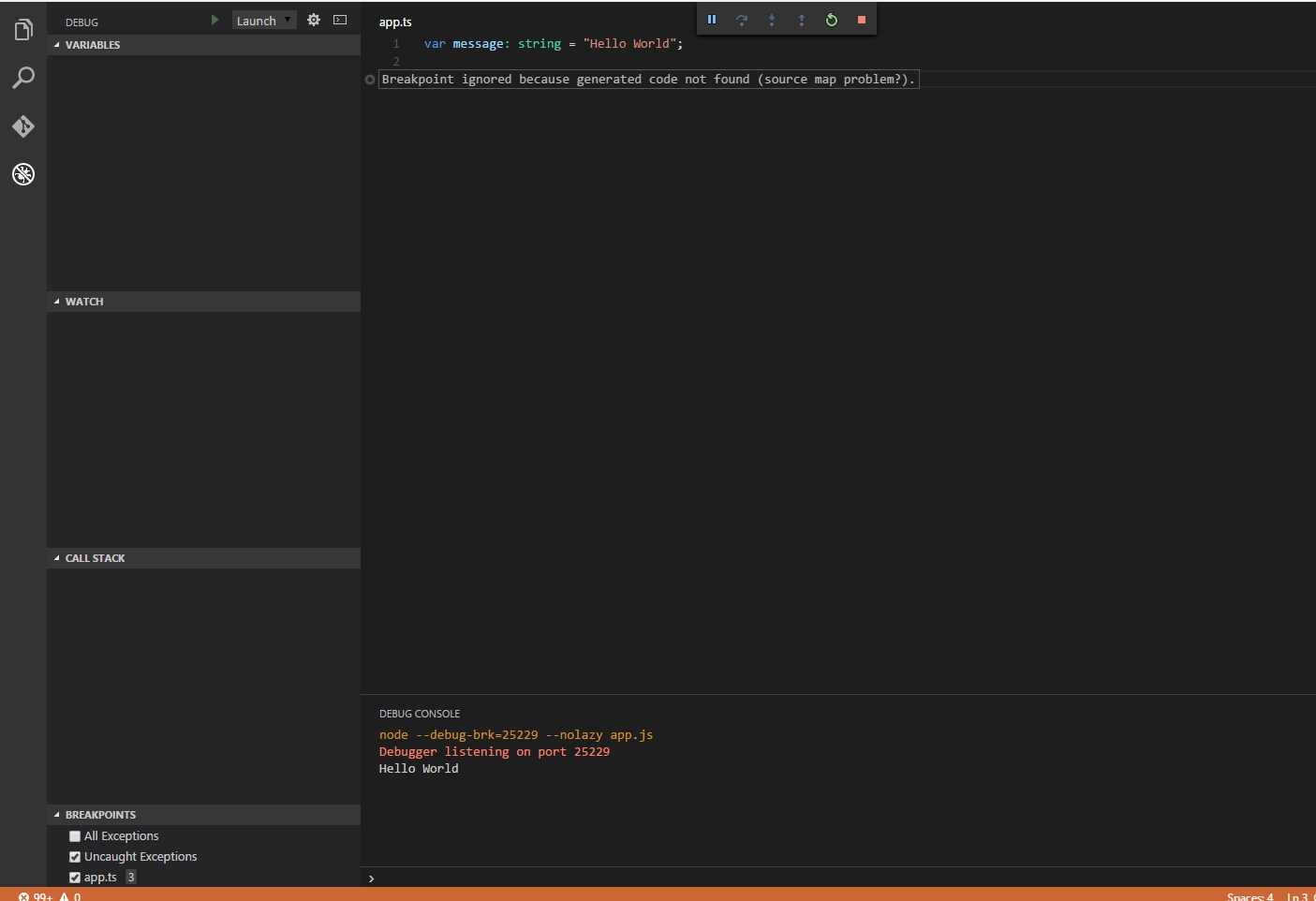 What am I missing?

Hi, I am still stuck on this. I managed to make one sample project that was hitting the break points but after I tried to copy that project to a different location on my HDD the break points again became gray and were not hit. What I did different in this test project was to use inline sourcemaps by compiling the TypeScript files with tsc app.ts --inlinesourcemap

I uploaded the mentioned sample project to GitHub so you can take a look at it here.

Here are my tsconfig.json

Here is small project, where you may see all parameters set https://github.com/v-andrew/ts-template

I came across this question while looking for a solution to a similar problem that I was having. Despite being different from OP’s problem, it might help others.

Context: I was following the Visual Studio Code HelloWorld example and found myself unable to stop on break points.

I solved my problem by changing .vscode/launch.json so that "sourceMaps": true attribute under the Launch configuration was set (it starts default on false).

Facing the same issue and solved it by correcting the path to .ts files.
My project contains src and dist dirs and the problem was that the generated .map files didn’t have the correct path to the src dir.

Initially, my sourceRoot was pointing to src and there is no src dir inside dist.

Also, sourceMaps should be set to true inside launch.json.

After ripping my hair out all day, I finally got it to work.

The problem is there’s three files to fiddle with – launch.json, tsconfig.json, and webpack.config.js so it’s all combinatorial.

the diagnosticLogging was key to helping me figure it out.

Microsoft please make this easier… Really, vscode could have figured this out or at least guided me more on the process.

Anyway here’s what finally worked in my launch.json:

Facing the same issue and solved it by correcting "webRoot" config in launch.json.
Here’s my workspace’s explorer view.

Update: TypeScript debugging is now added in 0.3.0 Update: Always clear your breakpoints, then attach, then add breakpoints. This is a bug and has been reported.

None of the other answers worked for me.

I then realised the program attribute in my launch.json was pointing to the .js file, but my project is a TypeScript project.

I changed it to point to the TypeScript (.ts) file, and set the outFiles attribute to point to where the compiled code lives:

This solved the issue for me!

There is really only one way to resolve this and that is to look at the source map path that is actually used.

Add the following line to launch.json:

Among a lot of other stuff, your console will have lines like these:

And then you just tweak your sourceMapPathOverrides to make the path match to your actual source path. I’ve found that I needed slightly different configuration for different projects, so understanding how to debug this really helped.

After a lot of time wasted on resolving this issue, it turned out the best way is to turn on debugging trace by adding the following line in launch.json.

And see where the problem actually is.
Your debug console will output something in the lines of:

Among a lot of other stuff, your console will have lines like these:

Use sourceMapPathOverride to fix it to actually match your path. The property “trace” used to be called “diagnosticLogging” which is no longer used.

I changed my config in launch.json for:

Include ‘”sourceMapPathOverrides”‘ was my solution

Late to the party, but you can check this post on github Test globbing support for the outFiles attribute in the launch config #12254.

Basically in the new version of vscode, you must now use the glob pattern with the property outFilesin your task.json.

I had a simlar issue. I fixed by indicating the output dir with outFiles

This config in launch.json worked:

I would like to contribute to spare some hours of head banging.

I used Debugger for Chrome for VS code (you don’t need this for webstorm), I would recommend spend 10min reading their page, it will enlighten your world.

After installing the debugger extension, make sure that source-map is installed, in my case I also needed source-map-loader. Check your package.json for that.

My launch.json which is the chrome debugger configuration (all my source files where under src) :

Add devtool: 'source-map' to your webpack.config.js.
Other parameters that generates mapping inlines won’t work with Chrome Debugger (they mention that on their page).

This is an example:

When you do that you must see a .map file of your generated app. If not then come back and verify your setup.

Now in VS Code switch to Debug Console and run .scripts. This is a very useful command because it shows you what generated code is mapped to which source.

If this is wrong then you have to verify your sourceMapPathOverrides in your launch.json, examples are available on the extension’s page

yes! in my case changing this in launch.json file solve the problem:

Using Angular I have found that I always point my folder directory to the src folder – that way my work-space is not so cluttered with root files that I never use. But this has given me several problems in the past especially when using VSCode, since many of the functionality seems to me to look at the folder structure, and start from there to run your files. (Expecting some of the missing files)

So I had this exact same problem with this error message, and learning from past experience I realized that I opened my project one folder deep, instead of the root <app name> folder. So I just closed my project and opened it one folder up (so that all the other files are also included in the folder structure) and my problem was immediately fixed.

I also believe that many of the above answers about changing your files and folder structure are workarounds to this problem of not opening your work project at the root folder, what ever framework/language you are using.

if you switch to visual studio type script project you can debug ts files normally
i think the issue in app.js.map generation file
here is sample from visual studio app.js.map