I have an Android project developed on Eclipse (GNU/Linux) that I last touched half a year ago. I am trying to import the project into Eclipse 3.6 on Windows (with ADT installed) installed using File -> Import Project in Eclipse. When the project is imported, I see the following error twice on the console:

Why is Eclipse looking for AndroidManifest.xml on the Android SDK path? The file actually seems to be in the project’s directory. How do I fix this problem and get the project to compile?

The way you are importing the Android project into Eclipse is wrong. The Correct way of doing is File -> New Android Project. In the Contents Tab in “New Android Project”, select “Create project from existing source” and choose the Build Target. That should fix your problem.

A simple solution is to either reimport the AndroidManifest.xml file or make a change to the file and save it. This worked for me.

If you see an error about AndroidManifest.xml, or some problems
related to an Android zip file, right click on the project and select
Android Tools > Fix Project Properties. (The project is looking in the
wrong location for the library file, this will fix it for you.)

To circumvent this quirk I imported the old project with the following steps:

It’s important to do step (2) before (3) otherwise the error persists and prevents running the project.

Experienced JAVA developers tend to go with the first option which is normally there and works for classic Eclipse projects. But this is not your typical project and I bet the Google developers put this special case in the wizard to accommodate the differences.

I had the same problem, all of the above did not work. I cleaned the project and it worked.

I had the same problem. I was trying to compile the JakeWharton view page sample, so I checked out the GIT in a directory in a different folder then the workspace which caused the problem.

Eclipse was maintaining 2 folders:
1. A new workspace folder was made under the workspace directory, which eclipse checks for libraries and others source code including the AndroidManifest.xml file
2. The existing folder which was not under the Root workspace

To fix the problem after importing I had to manually move the files in the new workspace folder created by eclipse.

I met this problem when using Facebook SDK, now I solve it by doing this:

this worked for me by the way:

Eclipse seems somewhat fragile in its naming conventions. One of the causes for this error is a difference between the project name and the folder name in the workspace. I imported a zip file for a project named “HelloDialogs” into a workspace folder named “HelloDialog”. This caused the “AndroidManifest.xml file missing” error. Once I renamed the folder correctly, everything worked fine.

Because of the multiple different answers here, I thouhgt I’d add yet another one that worked for me, as I had exactly the same issue when first working with Phonegap android dev tools.

So I found (as mentioned by Gintautas in comments to the accepted answer), that I had to create a new project using the phonegap ‘create’ script, then when importing the project into eclipse. the only way to get this to work successfully was if the project was originally created in some temp folder somewhere other than the place I actually want to work with it.

Then I imported the project in eclipse like this… 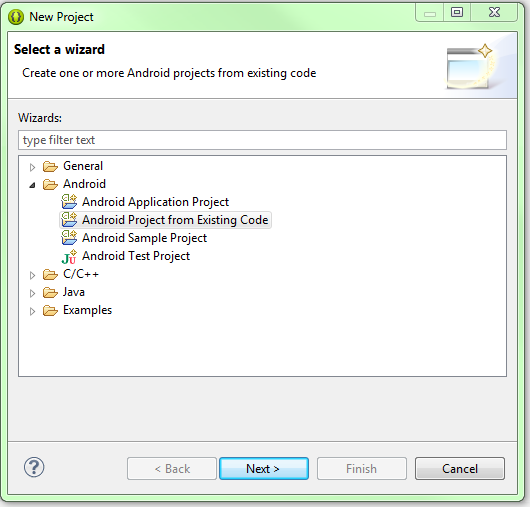 Now navigate to the temp location of your project and set that to the root directory, check the project you want and check “Copy projects into workspace” as the example below… 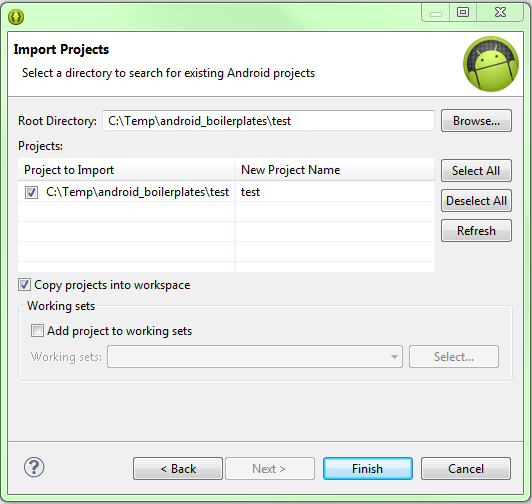 And that’s it, Eclipse should copy all your project files into your workspace and there shouldn’t be any errors in your project (fingers crossed). 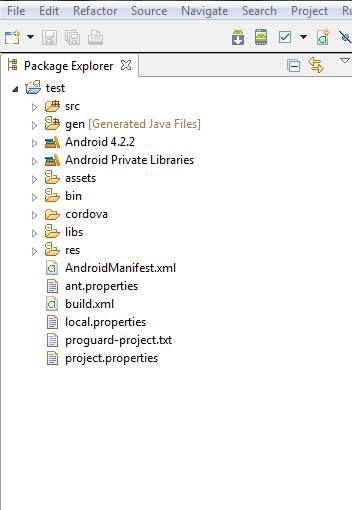 Hope that helps, it took me an age to work out why Eclipse didn’t like creating a new project from existing code when the new project was being setup in the same place as the existing code. This isn’t a problem for other languages I’ve used, so it was a little weird, but understandable as Eclipse (I’m guessing) seems to want to overwrite certain files.

Eclipse randomly decided to make another folder instead of the one that i had specified, but doesnt have any resources or data or layout etc in it..

it has some conflicts i guess..
anyway, a noob approach to this was, copying the original file to some other location(i put it to desktop)..

now create new project-create existing project, select this one from desktop, n VOILA.. its all fine.. 😀

I am a little late to this game but I caused this same problem by generating the initial application into the exact location I was going to work on it. That is to say I put it directly into my current workspace. I then did File, Import, Existing Android Code Into Workspace. The import process blanked out my android.xml file.

I tried above solutions and had no joy. I then generated the initial application into a temp directory and imported from there. This worked for me.

The only way to import a project into eclipse workspace is to create an empty project and then drag and drop all the folders and files into this project. Why is this so is beyond me.
The answer from Raunak is wrong.

I found a .classpath file in the root directory of my Android project. I opened it and updated the file paths in it, and it seemed to fix the problem for me.

I had the problem when I tried to update an old project with recent code from the SVN. I had the Manifest.xml exported to my local file system as backup and deleted it. I’ve then reverted my complete project to the most recent version from the SVN and then it worked 🙂

This is what I had to do to get this to work. Fortunately I had backups of earlier “project”.

Always make backups because Eclipse f–kups! I learned this the hard way when suddenly my Android project refused to work because of empty manifest-file.

Sometimes if you automatically fix imports in MainActivity IDE imports android.R class instead of one that will be generated for the project. Remove the import and recompile.

when importing project from another workspace add existing project in workspace. and tick to the copy projects in workspace.then check the api level and supporting library from project.properties files.then rebuilt project and clean it.. it is works for me.

2017 Solution: Much Easier and tested solution is to remove your application folder from elipse project only then Import it again and the problem will be fixed immediately!