I need to know how to decide which package is best suitable for testing my app. Some info is provided in this link

But I need more clarity on this…

TestCase – Plain old JUnit test case. It can be extended to test utility classes that are not tied to the Android framework.

AndroidTestCase – It extends JUnit’s TestCase. It’s a lighter
testing class compared to
ActivityTestCase. It doesn’t need to
launch an activity to run it. Its
getContext() method allows you to get
an injected context if you need one.
Since you can get a context from this
class, you can inflate your UI objects
to test their behaviors.

ActivityUnitTestCase – It gives
the tested activity an isolated
environment. When using it to test an
activity, the activity is not attached
to the system. This gives you more
control over what kind of environment
that you want your activity to be
tested in.

ApplicationTestCase – It provides testing for Application classes. It can be used to test the life cycle of an application.

InstrumentationTestRunner – The runner that runs the Android test
cases.

I just found this..Hope this helps for others…If u want more details like when and how to use, see the APIDemos test application in the samples directory within android SDK.

The accepted answer gives enough info in words. I just to make it clear using graph 🙂

For the InstrumentationTestCase @Zorb asked, it’s parent class for ActivityTestCase among others. It enables you to call the getInstrumentation method to get an instance of instrumentation so that you can operate application, activity, and so on. 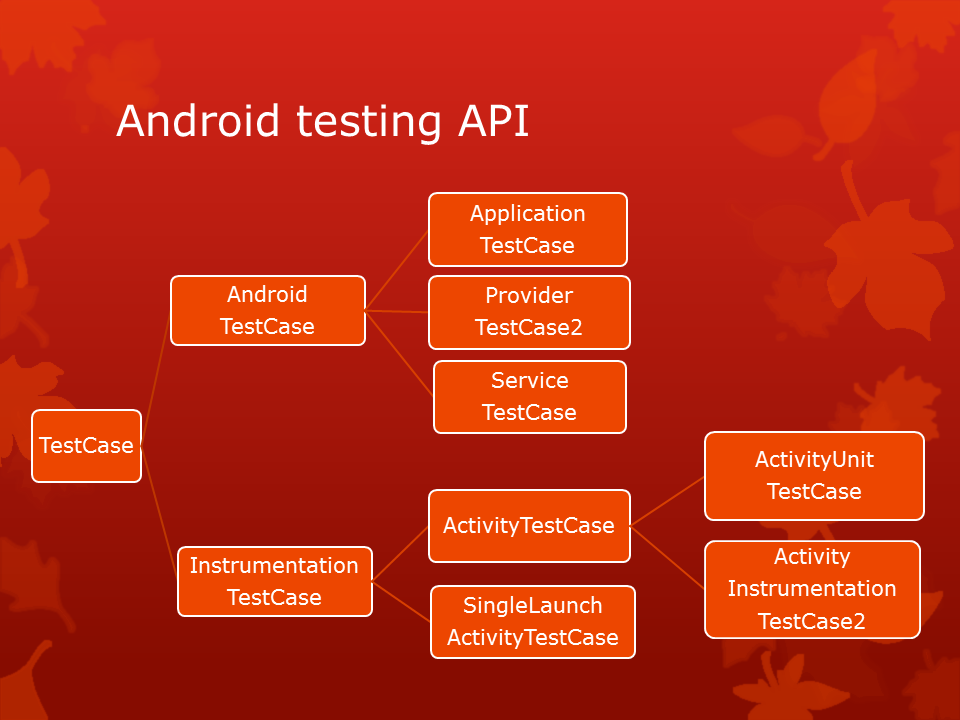 To clarify your question and collocate the classes you are asking for, it is essential BEFORE to divide testing in two categories. JUnit tests (in theory plain Java) and Instrumentation tests (that also are part of the JUnit test package but allow you to test more SDK Android related functionalities).

Traditional JUnit tests isolate a section of code and run a test. Instrumentation tests access instead more inclusively the android components. BUT ALSO THE INSTRUMENTATION TESTS DERIVE FROM THE JUNIT PACKAGE although they are instantiated in the system even before any application code is run and this explain why are slower, furthermore they need an emulator or phone that run the app you are testing to be executed.

(Follow in Bold all the class you mention, but there are others even more used that I will write without without the bold character).

A) Junit tests that extend TextCase (are usually faster than Instrumentation, and combine well with Mock framweworks)

AndroidTestCase: It allows to have access to the Context of the Activity you are testing and their resources, it is a base class that extends more specialized subclasses, it is ideal to access databases, filesystem data. You can easily call getContext() and access the Resources without establishing a direct contact with the Activities as will be with Instrumentation tests.

ApplicationTestCase that controls the environment where you text the application, mainly the context and the life cycle. Other really useful extensions of AndroidTestCase allow you to control Loaders,Services,and Content Providers, but for some reason still not any Broadcast receiver that you can call it [indirectly][1] with the method InstrumentationRegistry.getTargetContext() and then instantiating BroadCastReceiver. Also it is really common to use different Mock framework with Junit that is usually faster than InstrumentationTests

B) Instrumentation tests, that extend TestCase
Are considered functional tests, focused more to insure that they work well with the user side, the View part of MVC.They are usually slower than the other mentioned category

InstrumentationTestCase is a base class useful to send key events to UI to simulate QWERTY keyboard keys or DPAD buttons,also it launches the Activity that have to be tested, and even Intents

ActivityTestCase Usually is not used alone,it just has common code for the subclasses, but in the case you are not satisfied by the 3 classes that inherit from this one(see below) like a new future component you can use it by the time will not exist a TestCase class dedicated.

ActivityInstrumentationTestCase2 is the most used Instrumentation class to write functional tests, from the constructor is invoked the instance of the Activity to test. Basically you call the activity with getActivity() and you can pratically run any method of that Activity.

ActivityInstrumentationTestCase, is deprecated, and ActivityUnitTestCase that although is under the Instrumentation is more similar to an unit test

I found this tutorial from droidcon 09 to be really informative. Complete with downloadable working source code examples.

Edit: The link seems to be dead, as pointed out in comments.

It walks through creating a Celcius to Fahrenheit temperature converter test-first using ActivityInstrumentationTestCase2, TestCase and AndroidTestCase.