I create a blank cordova application in visual studio 2015 and start debugging with the visual studio android emulators (first with the lollipop and then kitkat). XDE starts and the screen displays OS is starting.... It stays like that for quite a while until it displays

The emulator is unable to connect to the device operating system;
The device did not response to the connect request.
Some functionalities might be disabled'

After closing the dialog, it stays there forever until I kill the emulator. Killing the emulator triggers an error from visual studio.

Could not start emulated device 'VS Emulator Lollipop Phone'.

When I open hyper-v, I see the vm in the list and shown as running. When I connect, I see the console screen as below 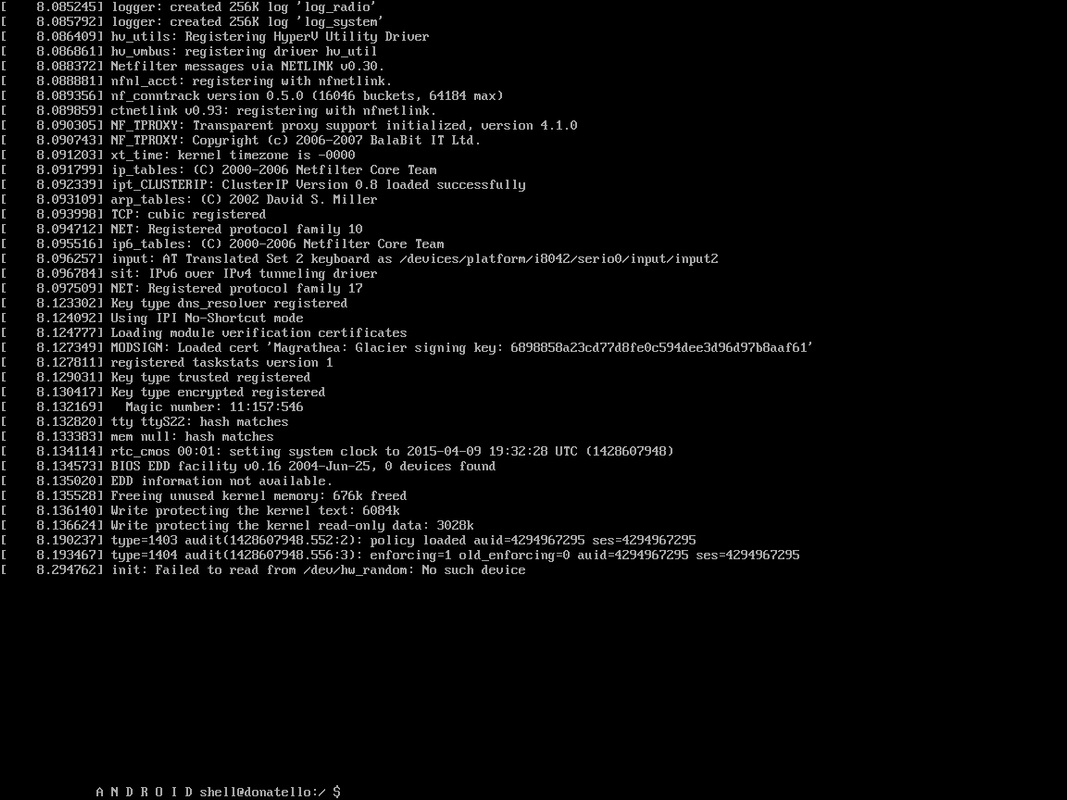 I know this issue has been around for a while now, but I have just found a new solution for people who may still encounter this issue…

The following fixed the issue:

Apparently it has something to do with newer Processor architectures being incompatible with the Android images or something like that – don’t really care, as long as it works 🙂

I was running into the same issue. I did try to disable OpenGL by deleting: GuestDisplayProvider = “VsEmulator.OpenGLGuestDisplay” in xdesku.xml, as suggested in other answers.

At first, the virtual machine would boot up (you could connect to it from Hyper-V manager), but the emulator window itself would not connect to the machine (stuck on “OS is starting”, then failing after a looooong while with the following message: “The emulator is unable to connect to the device operating system: Couldn’t auto-detect the guest system IP address. Some functionality might be disabled.”)

However, the emulator wasn’t working properly (scaling issues, no Home, Back, etc. buttons) until I put back the line “VsEmulator.OpenGLGuestDisplay” and after removing my profiles and rebooting a number of times.

To sum up, if you are encountering the same issue on an Hyper-V enabled computer, you may want to try the –over conscious– following steps:

There are probably some redundants steps here, but I think it covers everything you should try (the key seems to be making sure that the network adapters are setup properly). If I’ve missing some things or if you think some steps are useless, please comment.

After alot of searching I got this working. Hope this helps. I found it in the comments on MSDN Article for Android Emulator with Visual Studio 2015

The new images might work if you disable OpenGL by going to Program Files (or Program Files x86 if you’re on a 64-bit machine) \ Microsoft XDE \ 10.0.0.0 \ SKUs \ Android \ xdesku.xml and deleting this line: GuestDisplayProvider = “VsEmulator.OpenGLGuestDisplay”. However, without OpenGL turned on you will not be able to take advantage of many of the new features

On my system I got it working again after enabling the disabled vEthernet (Internal Ethernet Port Windows Phone Emulator Internal Switch) again.
I didn’t have to reboot.

I went through the steps in @Gyum Fox answer and still no joy for me.

While the Visual Studio Emulator for Android creates the first emulator instance, several virtual network switches are also created. For a laptop, typically three vEthernet instances are created; one for the wired LAN, one for the Wi-Fi, and another internal virtual switch for guest to host connections.

In my case, the vEthernet for the wired LAN was created successfully and then the Visual Studio Emulator for Android process would hang. This is observable from the Hyper-V Manager and the Virtual Switch Manager action.

Using the Virtual Switch Manager I successfully created the missing Wi-Fi virtual switch with these steps. Well, ultimately it worked. Read on.

In my case though, after clicking Apply, a failure message indicated the Wi-Fi adapter was bridged. Hmmm.

I started the View Network Connections control panel applet and the Wi-Fi adapter did not show it was bridged. (When a network bridge exists, the Status column has the word Bridged appended.) I suspect there was some dusty digital bits lurking somewhere in the registry.

Here is what cleared the issue for me.

Now, go back up to the steps to create the virtual switch for the Wi-Fi network. The steps should complete successfully now.

And now, you can go back to creating the Android emulators you want.

One final thought… If you aren’t seeing any virtual switches being created, I suspect that could mean the wired LAN might have the dusty digital bits hanging you up. In that case, I’d try add-and-remove-from-bridge trick on the wired LAN adapter to see if that clear things up for you.

And, now I suppose that just doing the add-and-remove-from-bridge trick on the network adapter without creating the virtual switch might suffice. For me, the creation of the virtual switch was proof that the issue was corrected. YMMV 😉

I found my issue was related to the windows firewall with some enterprise policies my company applied to all PCs. Once I stopped the Windows Firewall service it worked just fine.

I also had this issue and it was not just for android emulators but for all windows phone emulators.

This is what i did to fix the issue

[NOTE: The last time I was able to use the emulators (~3 weeks ago) I had wireless disabled and was using a wired connection on my Dev laptop. I ran out of space on my switch so re-enabled the wireless as the sole connectivity option. This may be totally coincidental, but read on and I’ll let y’all decide.]

After following Gyum’s steps without success, I decided to turn off the wireless and then try launching the emulator.

Wouldn’t you know it … it worked without an issue! 8-}

On my machine I could start the emulator but I got an OpenGL error when trying to deploy and debug. I realized my issues started after I installed Docker. On a whim I decided to shut down Docker and disable the vEthernet (DockerNAT) Network Connection. This fixed my issue. Now, whenever I need to use the Andoird emulator I have to shut down Docker. Then when I’m done debugging I enable/restart Docker.

One of the reason I was having this issue is that I did not install the Android SDK on the default location. So I had to follow these instructions in order to be able to debug my application: https://msdn.microsoft.com/en-us/library/mt228282.aspx#ADB

I had to create the folder “Android SDK Tools” and add the Key “Path” with the value to my SDK, which in my case it was “E:\Android\Android_SDK”